A Summary of the Geologic History of Delaware 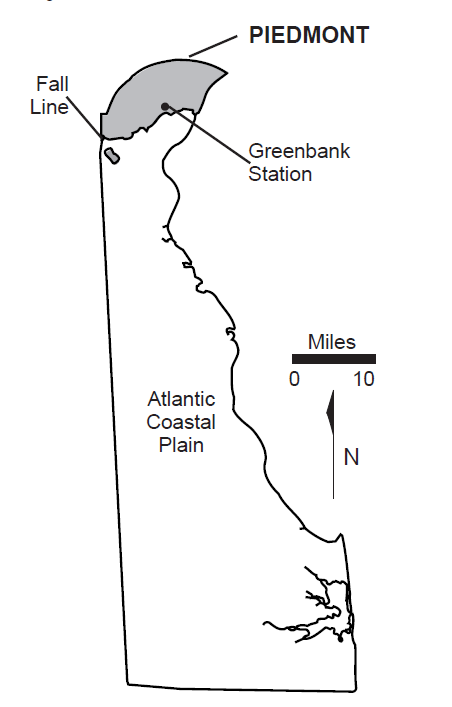 The Piedmont and Atlantic Coastal Plain Physiographic Provinces of Delaware are separated by the Fall Line.

The State of Delaware is located within two physiographic provinces, the Appalachian Piedmont and the Atlantic Coastal Plain. Most of the state lies within the Coastal Plain; it is only the hills of northern New Castle County that lie within the Piedmont. Piedmont means foothills. Delaware's rolling hills, which rise to over 400 feet above sea level, are a part of the foothills of the Appalachian Mountains. The rocks at the surface in the Piedmont are old, deformed, metamorphic rocks that were once buried in the core of an ancient mountain range. This range formed early in a series of tectonic events that built the Appalachians between about 543 and 250 million years ago. During an early event, called the Taconic orogeny, an offshore chain of volcanoes collided with the ancient North American continental margin to push up a gigantic mountain range that was as tall as the Alps or the Rockies of today. Geologists date the Taconic orogeny between 470 and 440 million years ago. The Taconic orogeny is important to our understanding of the geology of Delaware, because during this event, the rocks of Delaware's Piedmont were deeply buried under miles of overlying rock and metamorphosed by heat from the underlying mantle. Since that time, rivers and streams have carried the erosional products, mostly sand, clay, and gravel, from the mountains onto the Atlantic Coastal Plain and continental shelf. As the mountains wear down, the buried rocks rebound and rise to the surface. Thus what we see in the Piedmont today are old, deformed, metamorphic rocks that were once buried deep within an ancient mountain range.

The oldest rocks in Delaware also preserve the history of an earlier mountain-building event called the Grenville orogeny. This event occurred approximately one billion years ago. Within Delaware's Piedmont, five distinct rock units can be recognized: (1) rocks of the volcanic arc (Wilmington Complex), (2) rocks formed from the mud and sand deposited in the deep ocean that existed between the volcanic arc and the ancient continental margin (Wissahickon Fm.), (3 & 4) rocks that were once sand and carbonates (calcite and dolomite) lying on the shallow shelf of the ancient continental margin (Setters Fm. and Cockeysville Marble), and (5) rocks of the ancient North American continent (Baltimore Gneiss). The names given to these units indicate the geographic area where they were first identified. Because of the total absence of fossils, determining the age of the Piedmont rocks has always been difficult. Age must be determined either by correlation with units elsewhere in the Piedmont, or by calculating radiometric ages from measurements of radioactive elements and their decay products (usually uranium-lead). Fall Line Delaware's Piedmont ends at the Fall Line where the metamorphic rocks dip under and disappear beneath the sediments of the Coastal Plain. The Fall Line roughly follows Kirkwood Highway, Route 2, across the state between Newark and Wilmington. Parallel to the Fall Line is a narrow zone where rapids and waterfalls are common. Delaware's early settlers built near the rapids using the energy generated from the falls to power their mills. Explorers and sea captains of the colonial period found the bays, rivers, and streams of the Coastal Plain navigable until they reached the fall zone. Here it was necessary to dock their ships, unload the cargo, and move it inland by rail or road. Many of the settlements that grew around these unloading sites later became large cities. Richmond, Washington, Baltimore, Wilmington, and Philadelphia are cities built around ports located along the fall zone. Atlantic Coastal Plain Delaware's Coastal Plain rises to about 100 feet above sea level. Its streams drain into the Delaware River or Bay, and for much of their length they are tidal. The Coastal Plain is made up of sediments, mostly silt, sand, and gravel, that have been eroded off the Piedmont and adjacent Appalachian Mountains. In cross section these sediments form a southeastward thickening wedge that increases from 0 feet at the Fall Line to over 10,000 feet along Delaware's coast. Offshore, on the continental shelf, the sediments become even thicker with reported thicknesses of 8 to 10 miles. In the 1970s and 1980s, exploratory drilling in this thick pile of sediments found no commercial deposits of gas or oil, although one noncommercial gas deposit was discovered. Underlying the sand, silt, and gravel of the Coastal Plain lie consolidated rocks that geologists refer to as the basement. While test drilling into the basement near the Fall Line, metamorphosed and deformed rocks similar to those of the Piedmont were extracted; therefore, the basement is probably a subsurface extension of the Piedmont.

The contact between the sediments of the Coastal Plain and the basement is called an unconformity. An unconformity represents an interval of time during which no sediments are preserved to record geological events. In the Coastal Plain, the oldest sedimentary rocks beneath Delaware's coast are of Late Jurassic to Early Cretaceous age (140-150 million years), and the basement rocks they overlie are of Paleozoic age, older than 245 million years. During the time represented by this unconformity, the rocks we see in the Piedmont today reached the earths surface as approximately 7 to 13 miles of overlying rock were removed by erosion allowing the buried rocks to rise to the surface in compensation. The oldest Coastal Plain sediments observed in Delaware are river-deposited sediments. These sediments were eroded from the Appalachian Mountains to the west, transported to the southeast by rivers, and deposited where the rivers met the ocean to form a delta. On top of the river sediments a sequence of marine silt and sand deposits records the rise and fall of the sea level many times during a period of over 80 million years, from the Late Cretaceous until the end of the Tertiary Period, about 2 million years ago. On top of all of these sediments is a thin veneer of young sand and gravel that was carried into Delaware by glacial outwash during the Ice Age. Glacial ice did not advance into Delaware, but melt-water pouring off the glacier fronts carried great quantities of sand, silt, and gravel over southern Pennsylvania and Delaware. Delaware's largest mineral resource is the sand and gravel deposited from the glacial outwash. Most of the information and figures obtained from SP20 Delaware Piedmont Geology