Overview of Earthquakes in Delaware 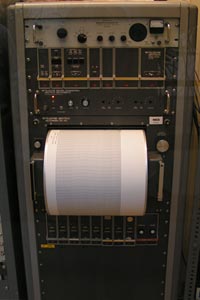 The Delaware Geological Survey currently operates seismic stations in Delaware. Fifty-eight earthquakes have been documented in Delaware since 1871. Refer to Baxter (2000) and http://www.dgs.udel.edu/delaware-geology/catalog-delaware-earthquakes-s… for more details about the DGS Seismic Network, Delaware Earthquake Catalog, and for documentation of earthquakes.

An earthquake occurred in Delaware on October 9, 1871, and caused severe property damage. In Wilmington, Delaware's largest city, chimneys toppled, windows broke, and residents were quite bewildered by the unusual event. Lighter damage was sustained in northern Delaware at Newport, New Castle, and in Oxford, Pennsylvania. Earth noises, variously described as "rumbling" and "explosive," accompanied the shock in several areas.

A tremor in March 1879 beneath the Delaware River, not far from Dover, was felt "strongly" in that area according to old seismic records. The records, however, do not describe the "strong" effects.

On May 8, 1906, a shock occurred in Delaware just three weeks after the noted San Francisco earthquake in California. Records state this shock was strong at Seaford, in southwest Delaware, but list no details concerning the event.

Two tremors, both below intensity V, occurred in Delaware, one on the Lower Delaware in December 1937, and one near Wilmington in January 1944.

More information about the frequency, locations, and science of earthquakes can be found in the adjacent pages on this site and in the DGS report: Special Publication 23: Earthquake Basics.