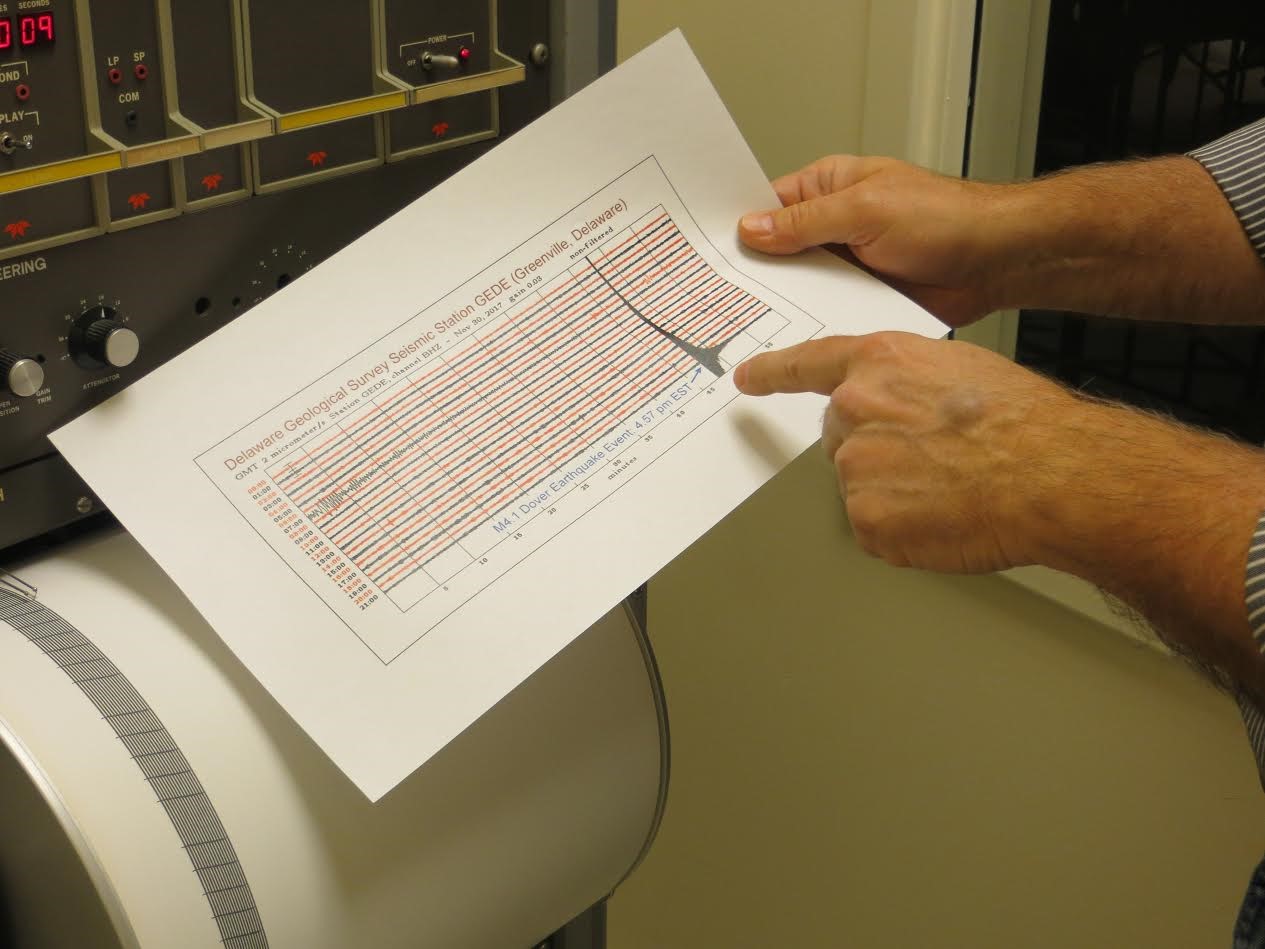 Seismograph recording of the November 30, 2017 earthquake from the DGS Greenville seismic station

Nearby seismic stations that detected the earthquake

The largest measured earthquake to occur within Delaware was recorded on November 30, 2017. The magnitude 4.1 temblor occurred at 4:47 p.m. with an epicenter located 6 miles northeast of Dover in Bombay Hook National Wildlife Refuge, according to data reported by the U.S. Geological Survey. Analysis of the shaking associated with the Dover earthquake indicates that the source was approximately 3 km (10,000 ft) beneath the land surface in deep crystalline basement rocks and had a predominantly strike-slip direction of motion (side-ways movement along a fault zone) with a significant thrust component (some upward movement along the fault), probably along a deep pre-existing fault related to the past tectonic episodes.

How did Delaware Geological Survey scientists confirm that an earthquake had occurred?

DGS operates a network of seismic stations in the state of Delaware to monitor earthquakes and feeds data into the Lamont Doherty Seismographic Network as well as to the U.S. Geological Survey. These stations provide publically available, real-time data on seismic signals (or wave energy generated by earthquakes) that occur. The DGS seismic station located in Greenville in New Castle County was the first station to receive the seismic wave from this earthquake.

How was this earthquake felt in Delaware and surrounding areas?

The Delaware earthquake of 2017 was felt in locations throughout the state and along the eastern seaboard from central Virginia to Massachusetts. Reports compiled on the internet by the USGS and DGS indicate a Modified Mercalli Intensity of IV felt closest to the epicenter and III around most of the region. An intensity of IV is generally associated with light shaking that is felt by many indoors but not as commonly felt outdoors. Dishes, windows, and doors may be disturbed; walls make cracking sound; and the earthquake may have a sensation like heavy truck striking a building. An intensity of III is commonly quite noticeable to persons indoors, especially on upper floors of buildings, but in many people may not recognize it as an earthquake. It may feel similar to vibrations from the passing of a truck.

As of Dec 15, 2017, the Delaware Geological Survey website had received approximately 260 "felt reports" from individuals in and around Delaware, with an average intensity reply between Mercalli III and IV.  Higher intensities, commonly VI, were reported closer to the epicenter, mostly in Kent County, many of the reports associated with shaking of dishes, teapots, and lamps. The USGS also has received nearly 17,000 reports through the internet from throughout the northeastern United States.

How is the strength of an earthquake measured?

The strength of an earthquake can be estimated by how it feels to people in the area or measured using seismic equipment. The Mercalli intensity scale is characterized by how a quake feels to the observer. A Mercalli intensity of III is considered “Weak” or "Slight." It is felt by people indoors, especially on the upper floors of buildings. A Mercalli intensity of IV is termed “Light” to "Moderate". It is felt indoors and, by some people, outdoors. Dishes and windows are commonly disturbed and rattle; it may give the sensation of a heavy truck striking a building.

The Richter scale measures the energy released by an earthquake and is determined using seismic equipment. Geophysical sensors called seismometers measure the amount of shaking of the ground at numerous locations; in Delaware, we have five seismic  stations that cover all three counties. The Dover M4.1 temblor fell in the lower end of the “Light” strength range, the class that includes Richter magnitudes 4.0 and 4.9. An interesting fact to remember about the Richter scale is that an increase of one number, such as from 4 to 5, means a 10-time increase in the amplitude of shaking and 33-time increase in energy released. This exponential increase in energy  is why the 5.8 event in August 2011 was felt more strongly by most Delawareans than this magnitude 4.1 quake near Dover; a magnitude 5.8 earthquake represents more than 350 times the energy of a magnitude 4.1 quake.

Why did this earthquake occur?

The geology of the Dover area is characterized by soft sediments and sedimentary rocks near the earth’s surface and hard basement rocks below approximately 4000 ft depth. The hard basement rocks are thought to be similar to the rocks exposed at the land surface in the hilly Appalachian Piedmont region of northern Delaware. Those basement rocks are thought  to contain old faults formed by tectonic movements of the earth’s crustal plates. The tectonic episodes that formed eastern North America include a series of continental collisions that built the Appalachian Mountains in several phases between 440 and 280 millions of years ago. This was followed, between around 230 and 190 million years ago, by the separation of North American tectonic plate from an adjacent plate, creating rift faults along the edges and beginning the opening of the Atlantic Ocean. Since this rifting ended around 190 million years ago, the east coast has been fairly quiet tectonically. Ancient faults related to these tectonic episodes exist beneath us and are mostly quiet but in some areas can experience a gradual accumulation of tectonic stress that is occasionally released in the form of an earthquake. However, in contrast with the tectonically active western coast of the United States, Delaware does not have a major fault line, like the well-known San Andreas fault system in California. Instead, Delaware is situated away from the edge of the North American Continental Plate, which is located a few thousand miles from Delaware in the Atlantic Ocean, placing the region at less risk for earthquake. Thus, tremblors that occur in Delaware are termed intraplate earthquakes as they occur within a tectonic plate.

Why was this earthquake felt beyond Delaware?

The geology of the Middle Atlantic region of the east coast favors the travel of earthquake energy for great distances. The earthquake source was centered near Dover, approximately 10,000 feet beneath the Delaware Coastal Plain, deep in hard, ancient basement rocks of the North American continental crust. The basement rocks are overlain by a blanket of softer sediments that progressively thins toward the Piedmont region in northern Delaware, to where the basement rocks are exposed at the surface as the hard rocks we see in the Piedmont Province, which extends along the east side of the Appalachian Mountains, including the Baltimore area, northernmost Delaware, and the Philadelphia area. Earthquake energy can travel well through the hard, cold ancient rocks that underlie our region, in contrast with areas such as California where there is abundant faulting and warmer, softer rocks that absorb the energy more quickly.

The ability of the Piedmont rocks to efficiently transfer earthquake energy is likely responsible for the northeast-trending line of “felt reports” that extend from northern Virginia to New England, and roughly follows the trend of the Piedmont.  The hard basement rocks of our region have been in generally the same configuration, with gradual sinking, for the last 180 million years.

How often do earthquakes occur in Delaware?

The earthquake on Nov 30, 2017 was the fifty-eighth documented event in Delaware since 1871, but it is only about every decade or so that there is an earthquake that people would feel.  To put that into perspective, approximately 3 million earthquakes occur worldwide each year, but ninety eight percent of them are less than a magnitude 3.