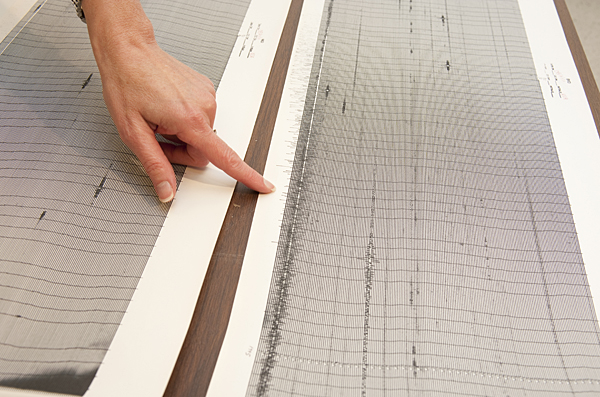 Seismograph recording of the August 23, 2011 earthquake

Delaware and surrounding areas experienced an earthquake event on the afternoon of Tuesday, August 23, 2011. According to the US Geological Survey, a magnitude 5.8 earthquake struck at 1:51 p.m. in central Virginia, in an area referred to as "the Central Virginia Seismic Zone" because of its relatively active earthquake activity for the region. The epicenter was located five miles south-southwest of Mineral, Virginia, with the quake was focused at a depth of 6 km (3.7 miles) below the surface. The Virginia Geological Survey reports that this is the largest Virginia earthquake known in historic times. A few small aftershocks have occurred in the hours afterward.

How was this earthquake felt in Delaware?

In Delaware, the earthquake was felt in many locations from northernmost New Castle County to coastal and inland Sussex County. The Delaware Geological Survey website had "felt reports" completed by more than 300 respondents as of 5:00 pm on Aug 23 and over 500 respondents by the evening of Aug 24 (thank you to all of you who replied!). Preliminarily, these responses indicate a Mercalli Intensity of III to IV. The average intensity of building shaking reported by respondents was "moderate." The majority of respondents noted movement or shaking of furniture such as, bookcases, chairs, and computer equipment, some window shaking, and a few overturned items such as picture frames, bottles, and sculptures.

As of 4:00 pm, the US Geological Survey website had received reports from 108 individuals in Delaware with an average intensity reply of 3.3, so between Mercalli III and IV. In the area of central Virginia near the earthquake epicenter, intensities of VII or "Very Strong" were reported, a level strong enough to make standing difficult and to damage poorly built structures. The USGS also received numerous responses from throughout the eastern United States.

How is the strength of an earthquake measured?

The Richter scale measures the energy released by an earthquake. Geophysical sensors called seismometers measure the amount of shaking of the ground at numerous locations; in Delaware, we have five seismic stations that cover all three counties. The August 23 temblor fell in the upper end of the Moderate strength range, between Richter magnitudes 5.0 and 5.9. An interesting fact to remember about the Richter scale â€“ an increase of one number, such as from 5 to 6, means a 10-time increase in the amplitude of shaking and 33-time increase in energy released. This 5.9 event had considerably more energy than the magnitude 3.8 quake that occurred in Delaware in 1973.

Why did this earthquake occur?

The Virginia Geological Survey notes that the earthquake activity in the area is associated with old faults related to movements of the earthâ€™s tectonic plates related to ancient mountain building episodes that were followed by the opening of the Atlantic Ocean about 150 million years ago. The opening of the Atlantic Ocean was accompanied by cracking of the earth's crust, or faulting, along eastern North America. Since the period of this rifting ended, the east coast has been fairly quiet tectonically, in contrast with the tectonically active western coast of the United States. Nevertheless, there are areas that still experience a gradual accumulation of tectonic stress that is occasionally released in the form of an earthquake.

Why did we feel this earthquake in Delaware so far from its central Virginia source?

The geology of the Middle Atlantic region of the east coast favors the travel of earthquake energy for great distances. The earthquake epicenter was located in the Virginia Piedmont, an area underlain by hard basement rocks that predate the opening of the present-day Atlantic Ocean. To the west lie ancient hard rocks of the Appalachian Mountains. To the east, the hard basement rocks are overlain by a blanket of softer sediments that thickens toward the Atlantic Ocean. The hard basement rocks of our region have been in generally the same configuration, with gradual sinking, for the last 150 million years. Earthquake energy can travel well through these hard, cold ancient rocks, in contrast with areas such as California where there is abundant faulting and softer rocks, which absorb the energy more quickly.

The DGS will update this page with additional information, as it becomes available, on the earthquake of August 23, 2011.

Reference(s)
More information can be found at
This page tagged with:
earthquakes
geohazard
seismicity
Delaware
Virginia