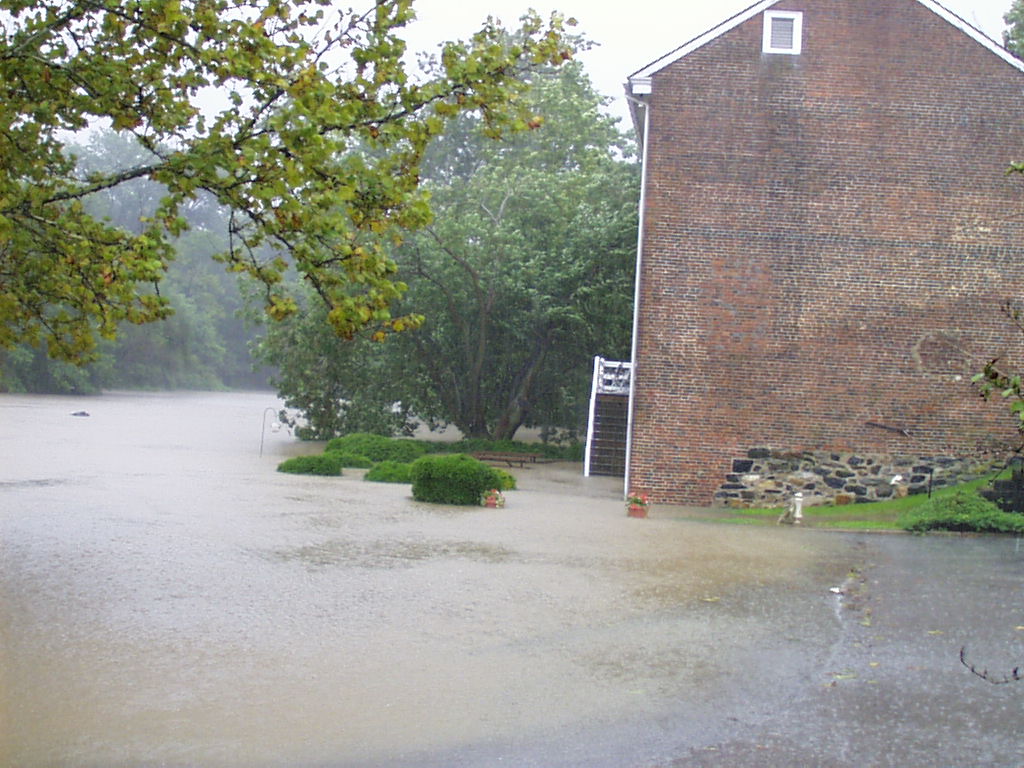 Natural hazards are those events in the physical environment that present risks to human life or property. The DGS identifies and investigates natural hazards to help understand the earth systems that present the hazards and determine strategies to prepare for or mitigate the risks. We are active in advising emergency management agencies on natural hazards, and are included in the Delaware Emergency Operations Plan as an agency having a vital role in dealing with floods, northeaster/extratropical storms, droughts, earthquakes, sinkholes, and dam failures. Because of the risk of coastal flooding in southern Delaware, the DGS conducts a program to document the effect of tides and winds on coastal erosion, especially for events with potentially large human impact. One effort as part of this program was a study of historical accounts of the effects of a Category 1 hurricane that swept northward from the Outer Banks of North Carolina, hitting Delaware on October 23, 1878. A storm surge in Delaware Bay raised water levels 6 feet in one hour in some areas, and the highest water levels in the Delaware River at Wilmington were as much as 12 feet above present sea level. More than 100 fatalities were attributed to the hurricane and property damage may have been as much as $150 million in today's currency. This storm may well be the hurricane of record for the Delaware region and provides a worst-case scenario for a modern hurricane.

Northeasters are a natural hazard that affects Delaware. Northeasters are storms with galeforce or stronger winds from the northeast generated by low-pressure systems offshore the U.S. eastern seaboard. These generate storm waves that can result in significant beach erosion. The duration of the storm is considered a critical factor in the severity of the erosion. Two severe northeasters between January 26 and February 6, 1998 brought tropical storm-force wind gusts to the Delaware coast. They produced the third and fourth highest tides measured at Breakwater Harbor near Lewes, high tides of record at the Coast Guard Station at Indian River Inlet and along Indian River at Rosedale Beach, and 20-ft-high waves at a buoy offshore the Delaware-Maryland state line, which caused some overwash of coastal dunes and localized coastal flooding. Few structures were damaged. In contrast, the severity of these storms is dwarfed by the devastating northeaster of March, 1962. Overwash was pervasive along the entire length of the coast; few sand dunes were left intact and barrier islands were essentially flattened. Most structures adjacent to the beach were damaged. However, tides were comparable for these storms; the 1962 storm had five successive high tides that were well above normal, yet the February 1998 storm had several high tides at similar levels as well as low tides that were higher than those of the 1962 storm. The difference in destruction at similar tide levels suggests that wave conditions may have been more severe in the 1962 storm. Given the extensive development of the coastline since 1962, a storm of similar magnitude would today likely cause damage in the billions of dollars and potentially result in human casualties. Assessment of storm event risks and response strategies depends, in part, on a sound understanding of hydrology and geology. The coastal regions of southern Delaware are impacted by coastal erosion and flooding during large storms, and the Piedmont of northern Delaware is susceptible to flash flooding during major rain events. The DGS serves on the Delaware Emergency Management Agency's (DEMA) Emergency Response Task Force for flooding, northeasters, and hurricanes and usually have staff located at the Delaware Emergency Operations Center during storm emergencies. We have recently been involved in the development of the Delaware Environmental Observation System in cooperation with DEMA and the Office of the State Climatologist. As part of this, a Coastal Flood Risk Analysis System has been proposed that will integrate stream-flow and tide-gage data with meteorological information in a network to be used for real-time flood analysis/prediction and emergency planning, response, and recovery operations. Other natural disaster-related activities include the DEMA Northeaster Task Force, the DEMA Technical Assessment Center for Natural Disasters, the DEMA State Hazard Mitigation Team, and advising on development of a statewide Dam Safety Program. Earthquakes are a natural hazard that occur in northern Delaware and adjacent areas of Pennsylvania, Maryland, and New Jersey. Over 550 earthquakes have been documented within 150 miles of Delaware since 1677, and 69 earthquakes have been documented or suspected in Delaware since 1871. Although Delaware does not face the same degree of earthquake hazard as other, more seismically active parts of the county, FEMA and the USGS in 1997 reclassified Delaware from a low seismic risk to a moderate seismic risk. The largest known event in Delaware occurred in the Wilmington area in 1871 with an intensity of VII (Modified Mercalli Scale). In the memory of many Delawareans is the 1973 earthquake, which was a magnitude 3.8 temblor (Modified Mercalli VVI).

Another hazard studied by the DGS is sinkholes. Geologic mapping in the Hockessin area shows an area underlain by marble and other carbonate bearing rocks that are particularly susceptible to sinkhole formation. At the request of the New Castle County government, DGS staff regularly review consultant's reports related to proposed construction activities in carbonate areas. We also have visited and educated concerned citizens when sinkholes have appeared on their property. Our input helps guide the development of relevant ordinances related to land-use planning and construction activities in these carbonate areas.  Depressions in yards may also be debris pits left from the original development of the property.  The State of Delaware and New Castle County have dedicated funding to remediate debris pits. If you believe you have a debris pit, both can assist you in determining the best course of action.