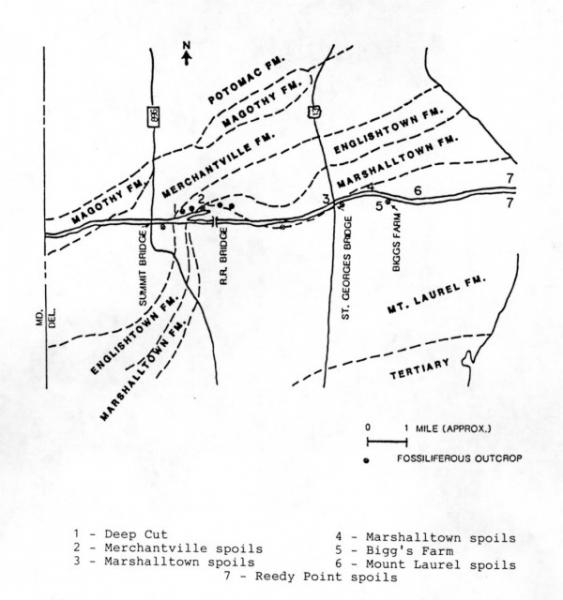 Fossil sites near the C&D Canal

Delaware offers a few sites for fossil collectors, and the Chesapeake and Delaware Canal and the Pollack Farm are first two locations to check out. Much information is known about these two sites. More information is below, including references to DGS publications detailing the areas. Some other locations throughout the state also offer good hunting grounds for fossil collectors. If you know of good sites in Delaware not listed on this page, please feel free to contact us!

The Chesapeake and Delaware Canal is likely the best site in Delaware for fossil collecting. When the canal was built, several formations having fossils from the Cretaceous Period (144 to 65 million years ago) were exposed. Fossils found there represent life forms that existed for a good portion of that period of time and that lived in a shallow sea or along the seashore. The fossils include large clam and oyster shells and a pen-shaped fossil called a belemnite. The belemnite species Belemnitella americana is one of the more common fossils from this area and so was designated Delaware's state fossil. It comes from the inside of a squid-like animal that lived in the seas of the Cretaceous Period. Similar fossils are found in New Jersey and in England. Geologists can use this information to correlate geologic rock units in different areas, allowing them to link events in different parts of the world.

Most fossils found in the Canal area are called "steinkerns." These are formed when a shell fills with mud that later hardens. In some cases, the shell then dissolves, although at the Canal many original shells also are preserved. Other fossils commonly found at the Canal include fish and reptile bones, including vertebrae and teeth. Good locations at the Canal to search for fossils are the dredge spoils near St. Georges and at the foundation of the Reedy Point Bridge. The U. S. Army Corps of Engineers has jurisdiction over the Canal lands, and small-scale collecting of fossils for private collections is permitted. It is against federal law to collect fossils from the area to sell. For more information

Located in Kent County, Delaware, the Pollack Farm Site was a surprise to many to contain numerous fossils. The fossils discovered range from a simple Arthropod, small insect, to large vertebrates, such as sharks. In 1991, while Delaware Geological Survey staff collected earth minerals during a highway construction, they came across an upper shell bed full of molluscan fossils. As digging continued numerous fossils of various species and phylum were found. The Delaware Geological Survey provides a resource of facts and photos of the numerous fossils found in central Delaware. This site includes links to four main phylum, which lead to fossil photographs containing brief descriptions. For more information

The Delaware mineralogical Society is a nonprofit organization dedicated to the promotion and education of mineralogy, paleontology and the lapidary arts. They hold regular meetings, an annual rock and mineral show (with numerous fossils for sale, great for kids and collectors alike!), and field trips throughout the state and surrounding area. Refer to their website below for more information.

Other Fossil Sites in Delaware

Other locations throughout the state also offer good hunting grounds for fossil collectors. Just south of Dagsboro, where Route 113 crosses Pepper Creek, the collector can find young (less than 2 million year old) marine fossils from the Pleistocene Epoch. At the state sand and gravel pit just south of Middletown on Route 896, plant impressions from the Pleistocene may be found. A variety of Miocene fossils are know from central Delaware. Fossils from the Miocene epoch, approximately 15 million years in age, have been found in the banks of the Coursey and Killen Ponds near Felton. This is addition to the fossils found at Pollack Farm. For more information: