Exploring the Wilmington Blue Rocks: A GeoAdventure in the Delaware Piedmont 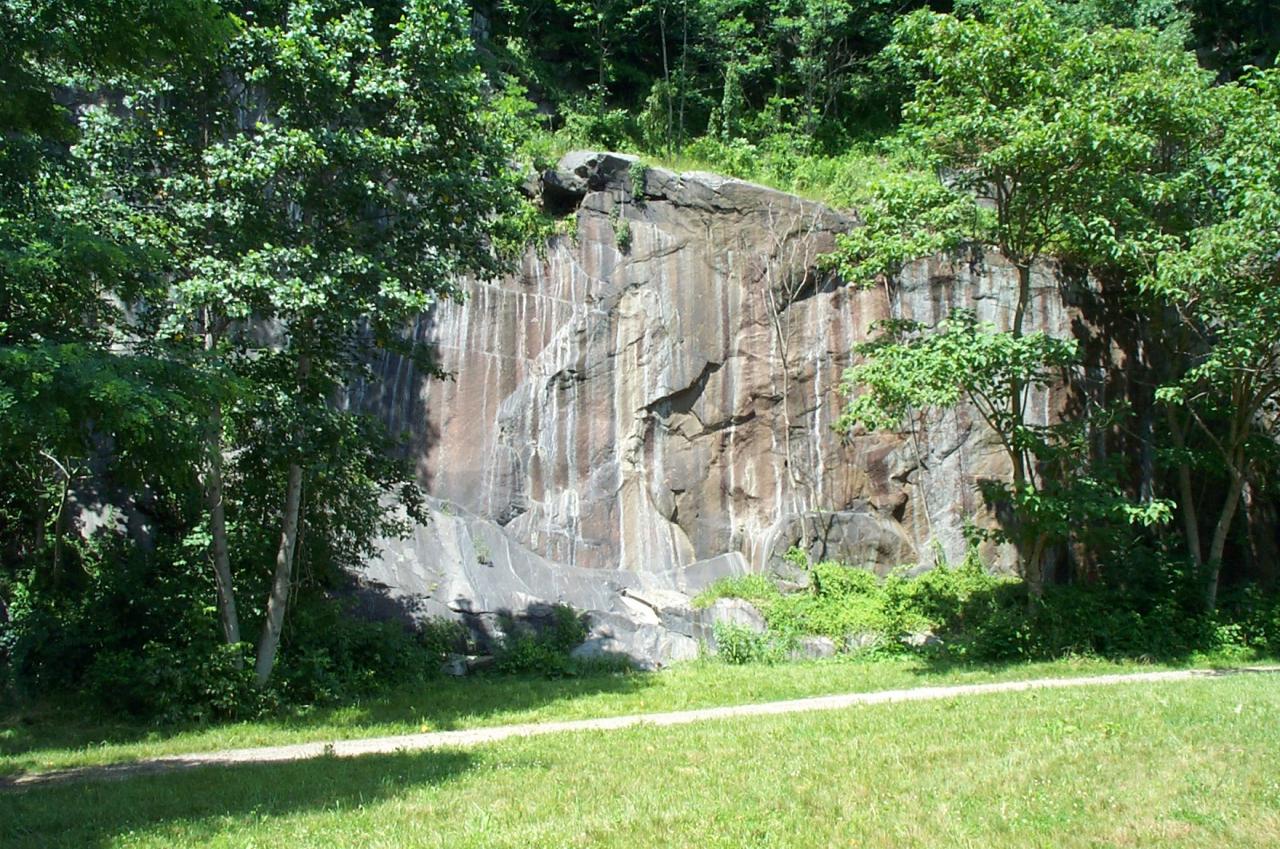 The Wilmington blue rock, Delaware's most famous rock, underlies both the city of Wilmington and the rolling upland north and east of the city. It is best exposed along the banks of the Brandywine Creek from south of Rockland to the Market Street Bridge. Along this section the Brandywine has carved a deep gorge in the blue rock. The water fall along this four mile gorge is approximately 120', and in the 17th and 18th centuries provided water power for one of the greatest industrial developments in the American colonies. The field trip stops described below are chosen as good examples of blue rock along the Brandywine Creek, and to illustrate how the geology has influenced the development of this area. It is not necessary to visit every stop to become familiar with the blue rocks, you may choose to visit only a few.

The specific objectives of this adventure are to:

The rocks you will see on this trip are locally called the Wilmington blue rocks or Brandywine Blue Granite. When found in stream beds, yards, or old quarries, the rocks are black or dark gray, however when freshly broken during quarrying the rocks are a bright royal blue. Although weathering changes the color, construction workers have always called this rock the "blue rock". Recognizing the importance of these rocks to the city, Wilmington's original baseball team called themselves the blue rocks, a name that has since been adopted by the city's new baseball team. Geologists map the blue rock by its geologic name "the Brandywine Blue Gneiss" and assign the rocks to a geologic unit called the Wilmington Complex. The Wilmington Complex forms the bedrock under the much of the city of Wilmington and Brandywine Hundred (Figure 1). The rocks are mostly a mixture of metamorphic gneisses and plutonic igneous rocks. The gneisses, which are the most abundant rock type, are the true "blue rocks". However when you see them today along the Brandywine, they are massive, solid, blue-gray rocks with few visible features to indicate their long history. Since their formation approximately 570,000,000 years ago, these rocks have experienced a long history of burial, high-grade metamorphism, deformation, uplift, and erosion. The metamorphism has totally recrystallized the rock to produce a monotonous body of rock that is wonderfully suited for building houses and fences. It is useless as road ballast as it breaks rock crushers so today the large boulders dug up during construction are usually buried off site.

The mineralogy of the blue rocks is simple, the rocks usually contain only four minerals; quartz, feldspar, pyroxene, and magnetite. Geologists have described this rock as a banded gneiss, even though the light-dark banding is weak and not always present. There are large areas that consist of only light gneiss or dark gneiss. The gneisses weather to form a white rind. It is only then that streaks of minerals up to one inch long can be seen on the white weathered surface. The dark streaks are usually pyroxene or magnetite and the lighter streaks are quartz and feldspar. The banding and the mineral streaks are the only features that are commonly seen in the blue rocks.

The tectonic setting proposed for the origin of the Wilmington Complex is thought to be the deep part of a volcano that developed over an east dipping subduction zone. The subduction and volcanism were early in a series of tectonic events that produced the Appalachian Mountain System. Later, probably between 480,000,000 and 440,000,000 million years ago, the volcanoes collided with the ancient North American continent. Because of this collision, the rocks of the ancient continent, the rocks in the volcanic range, and the rocks lying in the ocean between the continent and the range, were all folded, sheared and buried to depths of 10 to 12 miles where they were metamorphosed by extreme heat and pressure. For many years these buried rocks remained at very high temperatures, somewhere between the temperatures required for high-grade metamorphism and melting (around 1,300°F). Today, after uplift and erosion, the highly metamorphosed rocks are exposed in Delaware in what is recognized by geologists as the metamorphic core of the Appalachian Mountain System. Coarse-grained igneous rocks are exposed in Bringhurst Woods Park and in the communities of Arden and the Timbers. These rocks probably intruded into the blue rocks and may be younger. They are undeformed and only slightly metamorphosed, thus it is good site to study intrusive igneous rocks (Bringhurst Gabbro GeoAdventure). Use Figure 1 as a guide to where the 5 stops on this adventure are located.

Park in the lot on the east side of the Brandywine Creek just south of Thompson's Bridge Road. At this stop we will see the contact between the blue rocks of the Wilmington Complex and the metamorphic sedimentary rocks of the Wissahickon Formation. The contact runs northeast at 45 degrees parallel to the regional trend of the Appalachian Mountains, and is exposed along Rocky Run. There are two options for this stop. Walk (1) follows the southeast side of Rocky Run and will take approximately one and one half hours. Some of the walk includes bushwacking off existing trails so this trip is not suitable for young children. The exposures on Walk (1) are abundant and are good examples of both the Wissahickon and Wilmington Complex rocks. Walk (2) follows the dirt road from the parking lot to the south and will take about one half hour. This is an easy walk and you will be able to see both the metasediments of the Wissahickon and the black boulders of the Wilmington Complex. Walk (1)

This is the most easily accessible stop and will take between fifteen minutes and a half an hour to observe the blue rocks at this location. Follow the main road in Rockford Park to the parking lot at the tower. Park and walk toward the Brandywine Creek. Along the ridge are large outcrops of sharply banded Wilmington Complex gneisses (location of "star" in Figure 4). The banding runs 40 degrees east of north, parallel to the regional strike of the Appalachian Mountain System. The layers are vertical, orientated perpendicular to the land surface.

The bands are 9 to 12 inches thick. During intense metamorphism, around 440,000,000 years ago, these rocks were totally recrystallized and stretched. During stretching, the dark bands were more rigid than the light bands and separated. The light bands were plastic and flowed between the separations. French geologists named this texture boudinage. It is caused by intense squeezing or stretching of the rock while it is warm and plastic. The light bands are composed of quartz and plagioclase feldspar, with minor amounts (Stop 3. Quarries on Brandywine Creek, Alapocas

This quarry has recently been given to the county as part of its park system and can be accessed on the Delaware Greenway (location of "star" in Figure 5). Good exposures of Wilmington Complex gneiss or blue rock are found on the exposed back wall of the quarry. The rock is a monotonous, light-colored gneiss with a few thin dark bands. The dark bands appear to have been deformed by stretching or pulling apart and often occur as pieces about a foot long . Thicker dark bands may persist for the extent of the exposure. The dark bands probably represent original lava flows. This rock looks as if it has been squeezed and stretched. The stretching occurred many years ago when the rocks were hot and plastic. Today these rocks in the quarry are hard and brittle. They will no longer bend or fold, but they will fracture and break during earth movements such as earthquakes or erosional unloading.

Large boulders line the banks of the Brandywine as it flows through Brandywine Park. The boulders along the creek are blue rocks, but the banding is replaced by irregular layering and, in some rocks, the mafic bands are replaced by clots or pods of mafic rock (location A, B, C in Figure 6). This stretch of the Brandywine was the location of many of the mills, thus the bedrock is much disturbed. A large mill race still exists on the southwest side of the creek, however in the 18th century mill races bordered both sides of the stream. The races carried water to turn water wheels and provide energy for the many mills built below the great falls near the Market Street Bridge. Below the Market Street Bridge the Brandywine is navigable, allowing ships to sail up the Christina and lower Brandywine to pick up the flour, cotton, and snuff from the mills that lined the stream. The rock removed from the mill races was used to build homes for the mill owners and workers. Many of the houses and churches in Brandywine Village that have been built from blue rocks are now beautifully restored.

This stop will take about one half an hour and is an easy interesting walk through the park at Old Swedes Landing to "The Rocks" in the Christina River (Figure 7). In 1638 the Kalmar Nyckel and the Fogel Grip sailed up the Christina River past the entrance to the Brandywine to "The Rocks" where a large flat slab of blue rock protrudes into the main channel of the river. This rock slab was a convenient place to unload the weary passengers that were aboard the ships. The passengers, mostly Swedes and Finns, stayed and settled on the Christina near this site.

The large flat slab of rock on which the early settlers landed, although reduced to make room for river travel on the Christina, is still a present in Swedes Landing Park. "The Rock" is a slab of Wilmington Complex gneiss or blue rock, and marks the eastern edge of exposure of the Appalachian mountain system where the hard rocks of the Piedmont Province plunge beneath the soft sediments of the Coastal Plain. The boundary between the Piedmont and the Coastal Plain is defined in most places by a well-marked change in topography, usually an abrupt transition from rolling hills to a flat smooth lowland. Geologically it defines the transition from the hard crystalline rocks of the Piedmont to the gently dipping beds of younger clays, sands, and gravels of the Coastal Plain. This boundary is called the Fall Line, and extends along I-95 from Newark, through south Wilmington, toward the Delaware River. It is but a portion of the line or zone that extends unbroken from New York to Georgia. Many of the great cities of the east such as new York, Trenton, Philadelphia, Wilmington, Baltimore, Washington, Richmond Raleigh, and Macon are built on the Fall Line.