The Bringhurst Gabbro: A GeoAdventure in the Delaware Piedmont 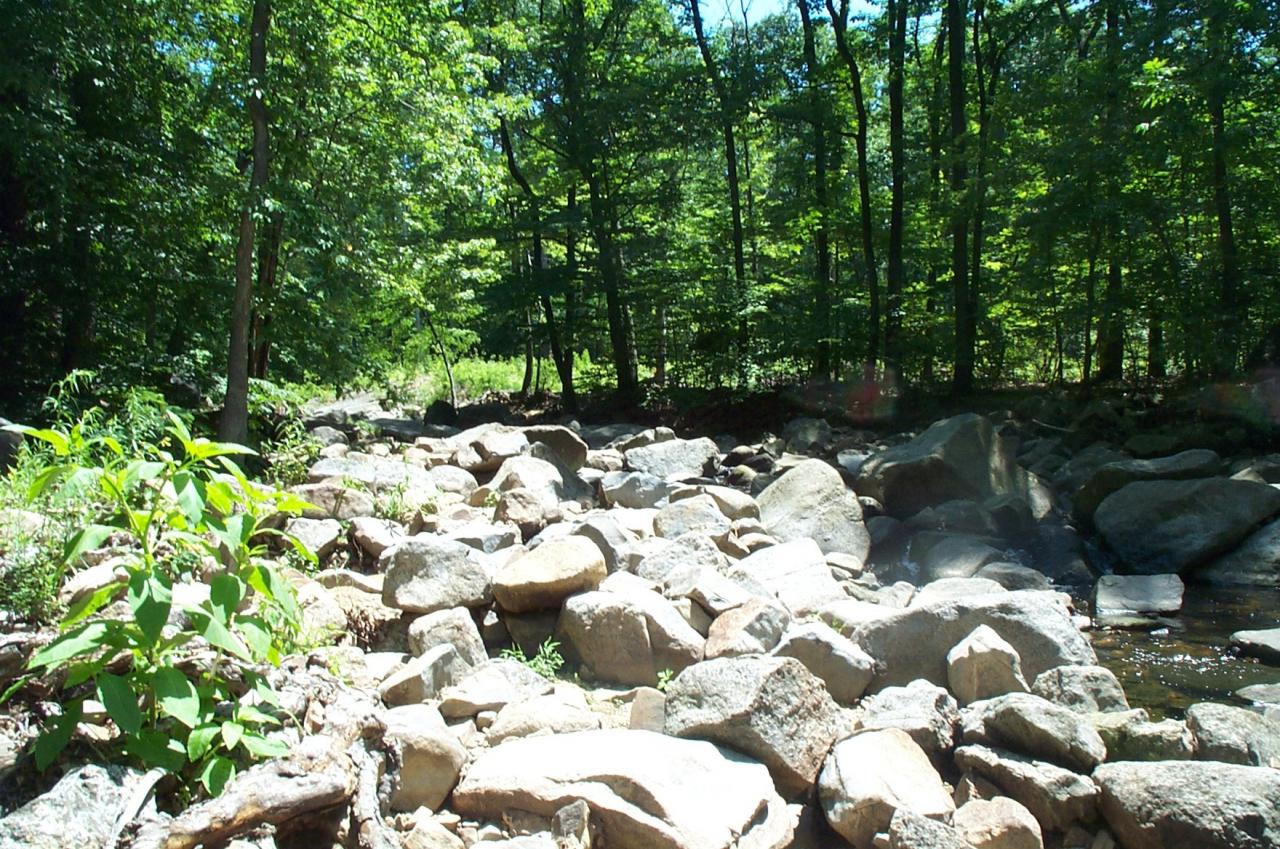 A field trip to Bringhurst Woods Park is appropriate for students in grades 5 and up (10 years and older), and provides an opportunity to observe intrusive plutonic igneous rocks that have intruded into country rock, which in this case is the blue rock or what geologists call the Brandywine Blue Gneiss. In addition, the minerals in the pluton are large, easily identified, and interesting. Mineral collecting is not allowed within the park, however permission may be obtained to collect along Shellpot Creek southeast of the park. Please do not use rock hammers on the rocks in the park.

The specific objectives of this adventure are:

Shellpot Creek in Bringhurst Woods Park is choked with large rounded boulders of Bringhurst Gabbro that have eroded out of the surrounding hills. A close look shows the minerals in the gabbro are between 1/4 and 2 inches in length and 1/4 to 1 inch in diameter (Figure 2). Blobs of fine-grained dark rock are common in the Bringhurst pluton. These dark blobs are chunks of Wilmington blue rock that were picked up and incorporated into the magma as it intruded into the gneiss. These inclusions are called xenoliths, a word derived from the root xeno- meaning foreign and lithos- meaning rock. Thus, a xenolith is a foreign rock enclosed within another rock. In this case the xenoliths are derived from the country rock, the Wilmington blue rock. Although the Wilmington blue rock is composed of both dark layers and light layers, all the xenoliths are derived from the dark layers. This is possibly because the light-colored inclusions melted at a lower temperature than the dark inclusions, and the light inclusions melted in the hot gabbroic magma of the pluton becoming commingled and no-longer recognizable.

A contact between the coarse grained rocks of the pluton and the Brandywine Gneiss occurs approximately 700 to 800 ft east of the park entrance (Figure 1). The gneiss at the contact is contorted and contains clots of quartz. Before a field trip to Bringhurst Wood Park, it is recommended the group visit one of the Wilmington Complex stops described in the Wilmington Blue Rocks Geologic Adventure, so the participants can recognize the Wilmington blue rock.

Minerals of the Bringhurst pluton (Figure 2) are plagioclase feldspar, pyroxene and olivine. The plagioclase is dark gray and glassy. Feldspar has two distinct cleavages, thus when a feldspar crystal is broken along a cleavage plane it will present a smooth shiny surface. The pyroxene crystals are elongated, black or bronze colored, and may have a distinctive schiller or iridescent luster on a fresh surface. The olivine grains are less common than the pyroxene, and in this pluton, the olivine grains are usually rusty and have a black rim. Individual minerals in the rims cannot be recognized in hand specimens, but microscopic study has identified an inner rim that is an intergrowth of orthopyroxene with spinel and an outer rim that is an intergrowth of hornblende with spinel. The olivine-bearing rocks are more abundant southwest of the park entrance.