Deformation in the Piedmont 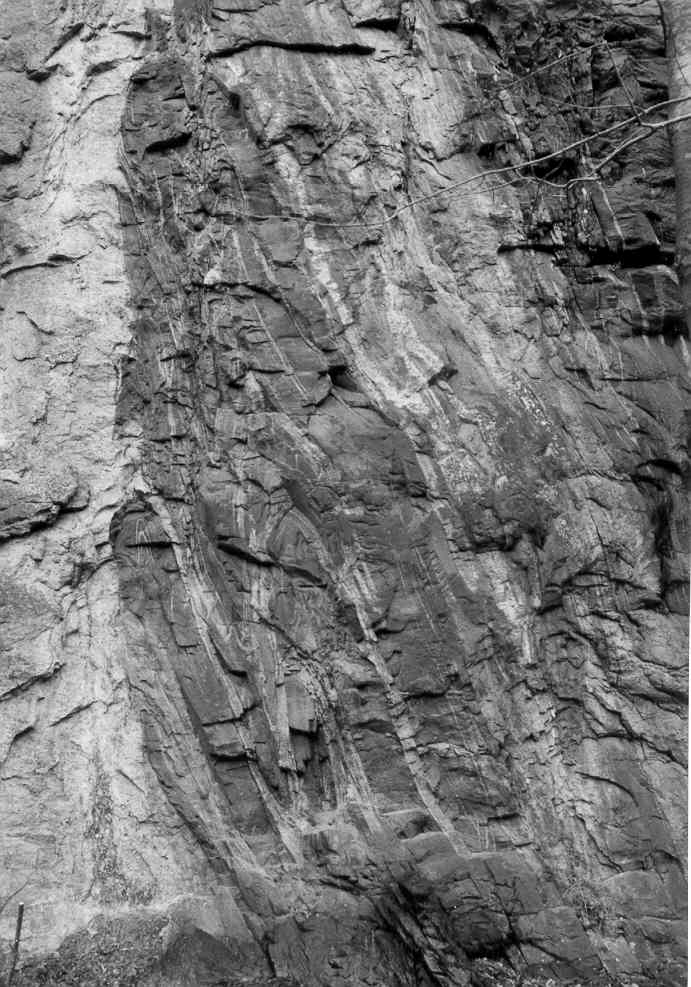 All of the rock units in Delawareâs Piedmont are highly deformed. Deformational features, such as folds, faults, and/or joints, are present in almost every outcrop.

The folds are a remarkable assortment of sharp folds, angular crinkle folds, and round gentle folds that may be upright, inclined, or turned upside down. The variety can be attributed to several distinct episodes of folding, and to the different mechanical properties of the rocks. For example, the soft mica-rich gneisses of the Wissahickon were crinkle-folded, whereas during the same deformation the more rigid amphibolites were bent into rounded folds. Overall, the folds in the Piedmont suggest a long compressional event in soft rocks that were hot and deeply buried.

Although folding styles in the rocks vary dramatically, the trend of the folds is remarkably consistent across the Piedmont, and parallels the trend of the Appalachians as a whole, which is northeast-southwest. Folds permit determination of tectonic trends and are convenient indicators of crustal movements. Thus the folds in the Piedmont suggest a geologic setting at colliding plate boundaries, and the orientation of the folds indicates convergence from the southeast.

Today in the Delaware Piedmont there are no large active faults. Delaware is positioned on the trailing edge of the North American plate in a moderately active tectonic area. Several hundred million years ago, when Delaware was caught between two colliding plates, deep earthquakes were frequent and probably violent as regional faults stacked the various units in the Piedmont into a high mountain range. These ancient faults are difficult to identify, having been largely obscured by metamorphism and deformation.

Faults in cool brittle rocks may offset folds or layering across the fault surface, form a smooth slick surface called a slickenside, or grind up the rocks to produce fault gouge. These indicators of brittle faulting are present in the Piedmont rocks, but they are less common than folds and joints, and are younger features.

Almost all the rocks exposed in Delawareâs Piedmont are broken and fractured to form joints. If joints form in deeply buried rocks, they are normally healed with vein material, such as quartz or mixtures of quartz and feldspar. Because the Piedmont rocks were once deeply buried, healed veins are a prominent feature of these rocks. Most of these veins were healed before the major deformational events, and are now folded, stretched into thin layers, or pulled apart into segments.

Surface exposures of Wissahickon and Baltimore Gneiss rocks are riddled with very young horizontal and vertical joints, most likely the result of unloading and expansion as the overlying material is removed by erosion. Wilmington Complex rocks will joint and weather by peeling off a curved shell leaving round rocks. This jointing and weathering style is typical of massive, unlayered rocks. Thus, to a first approximation, it is possible to distinguish the rocks of the Wilmington Complex from those of the Wissahickon by the shape of the rocks at the surface. The Wissahickon rocks are angular and sharp whereas the Wilmington Complex rocks are round. The brittle fractures in the Piedmont rocks are important because they provide storage reservoirs for ground water. To produce water, the wells in northern Delaware must tap a fracture zone.