The Piedmont occurs in the hilly northernmost part of the state and is composed of crystalline metamorphic and igneous rocks. These include a variety of rock types that were formed deep in the earth by metamorphic processes, mostly in the early part of the Paleozoic Era (app. 400-500 million years ago), and later uplifted. The rock units of the Wilmington Complex in the Piedmont are subdivided into geologic units called lithodemic units. These bodies of rock are identified by distinctive geological characteristics and are sufficiently thick and areally extensive to be mapped at the earth's surface and/or in the subsurface. Other rock units are mapped as formations. The age of the geologic units that are recognized in the Delaware Piedmont by the Delaware Geological Survey are summarized in the chart below. 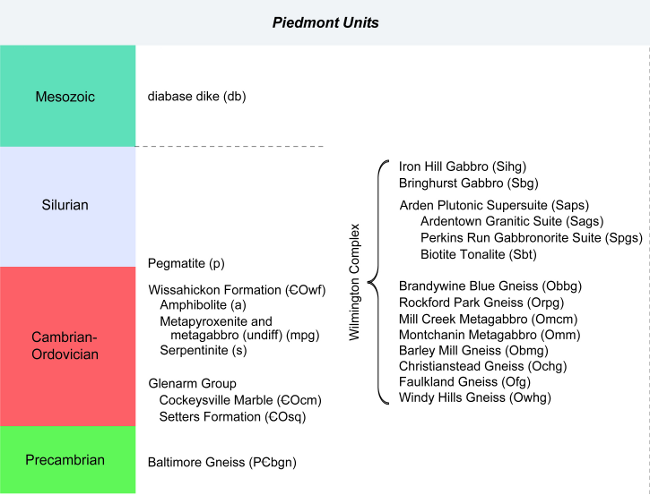 Abbreviations are those used on Delaware Geological Survey maps and cross sections. Geologic time scale not to scale.

For more details (breakdowns) of geologic time, please refer to: