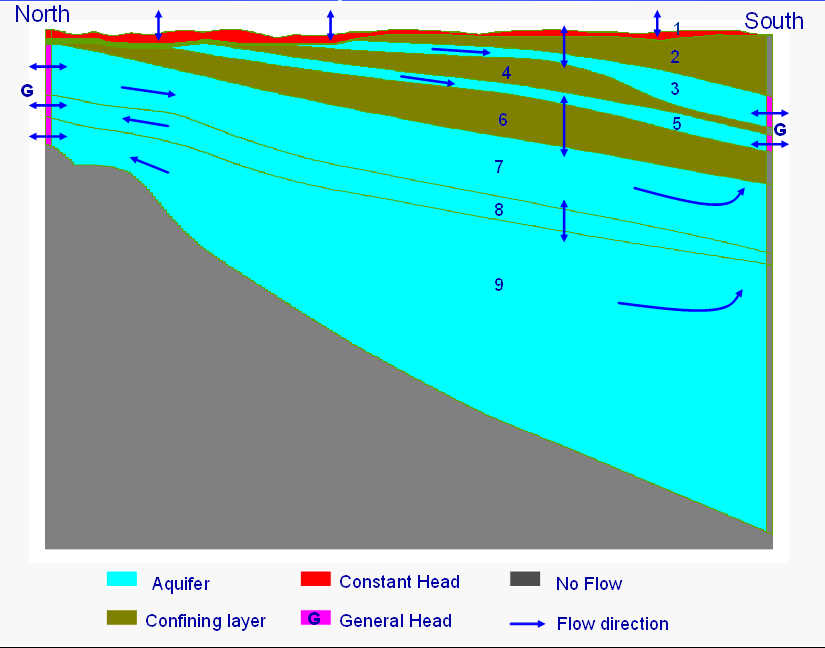 To understand the effects of projected increased demands on groundwater to supply water, a finite-difference, steady-state, nine-layer, groundwater flow model was used to simulate groundwater flow in the Coastal Plain sediments of southern New Castle County, Delaware. The model simulates flow in the Columbia (water table), Rancocas, Mt. Laurel, combined Potomac A/Magothy, Potomac B, and Potomac C aquifers and intervening confining beds. Although the model domain extends north of the Chesapeake and Delaware Canal, east into New Jersey, west into Maryland, and south into northern Kent County, the model focuses on the area between the Chesapeake and Delaware Canal, the Delaware River, and the Maryland-Delaware border. Boundary conditions for these areas were derived from modeling studies completed by others over the past 10 years.

The model predicted head patterns in the Magothy/Potomac A, Potomac B, and Potomac C aquifers that are similar to those in previous modeling studies. Pumping in the Magothy/Potomac A aquifer from wells located in southern New Castle County has lowered heads and is directing flow to the pumping center near Delaware City. Pumping from wells in the Potomac B and Potomac C aquifers in New Castle County north of the C&D Canal has lowered heads in these aquifers both north and south of the canal and caused flow to be directed north toward northern New Castle County pumping centers.

Water-budget calculations indicated that there is significant movement of water from the Magothy/Potomac A aquifer downward to the Potomac B and Potomac C aquifers. The predicted flow of water from the Columbia, Rancocas, and Mt. Laurel aquifers to the deeper Magothy/Potomac A, Potomac B, and Potomac C aquifers is highly dependent on the hydraulic properties of the confining bed between the Mt. Laurel aquifer and the Magothy/Potomac A aquifer. This finding supports the need for hydraulic data from the confining layer and indicates the potential for pumping from Potomac aquifers to impact groundwater and streams in southern New Castle County.

Compilation and review of data used for model input revealed gaps in hydraulic property, pumping, aquifer and confining bed geometry, and water-level data. The model is a useful tool for understanding hydrologic processes within the study area such as horizontal and vertical flow directions and response of aquifers to pumping, but significant data gaps preclude its use for detailed analysis for water resources management including estimating flow rates between Delaware and adjacent states.

The results of this study have been published in DGS RI77.