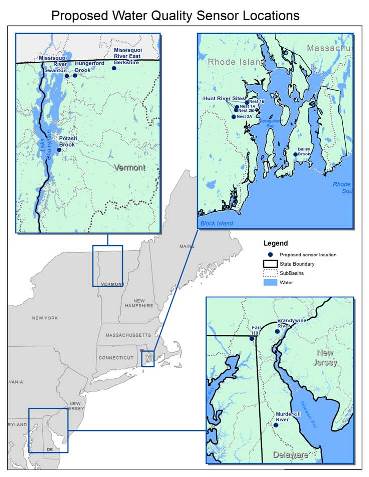 The North East Water Resources (NEWRnet) consortium of EPSCoR jurisdictions of Delaware (DE), Rhode Island (RI), and Vermont (VT) will create an advanced sensor network in watersheds for gathering high-frequency, spatially-extensive water quality and quantity data and a network of lab and field-based experiments and agent-based models to investigate how to align sensor data and their visualization with utilization by stakeholders. DGS is participating in the watershed sensing network by installing and operating a nitrogen and organic carbon sensor and stream discharge monitoring station in the Murderkill River watershed, and collaborating with the project team to interpret results. Other UD investigators include William Ullman and Tye Pettay (CEOE), Dan Leathers and Del Levia (Dept. of Geography), Shree Inamdar and Kent Messer (CANR), and Shawn Polson (DBI). This project began in August 2013 and is scheduled to run for three years. Post-doctoral fellow Yoanna Voynova left the DGS project at the end of 2014 for a job at the Helmholtz-Zentrum Geesthacht Centre for Materials and Coastal Research in Geesthacht,Germany. Post-doctoral fellow Chris Main left the project at the end of 2015 for a position with the DNREC laboratory. Infrastructure that will support the NEWRNet water quality monitoring station was installed at the main outflow of Coursey Pond on the fish ladder on April 23, 2014. Components of the installation include: A vertical standpipe with intake and fittings that will protect the YSI-EXO, S::can Spectrolyser and cables, and stage height pressure sensor Weathertight enclosure Solar panel and power controller Electric conduit Steel superstructure to support the enclosure and solar panel Battery Campbell datalogger S::can controller YSI DCP Cellular Modem.

DGS research technician Steve McCreary fabricated the superstructure and led the 4-hour effort to install the device on the pier. Thanks to the DEOS team for purchasing and delivering the enclosure, battery, and solar panel. The water quality instruments were deployed in June 2014. These instruments measure temperature, pH, dissolved oxygen, specific conductance, fluorescent and dissolved organic matter, turbidity, and nitrate. Telemetry equipment forwards data from the site to DEOS computers where it is accessed by the project team through a web-browser connection. Highlights as of May, 2017: -The system has generated over 28,000 water quality records. Automated data visualization and QA processes have been developed. -A stage height-discharge rating curve has been developed from eigth individual stream discharge surveys conducted under a variety of flow conditions. -Project findings presented at Coast Day 2014, Fall 2014 AGU meeting, April 2015 DGS Research Symposium, and January 2017 AGU Chapman Conference on Extreme Climate Events. -Grab samples have been collected on 30 dates from four locations. -A sensor that measures both chlorophyll A and phycocyanin pigments was added to the EXO sonde. -James D. Hanes joined the project as a NEWRNet undergraduate intern for summer 2015. Christina Lodge was an undergraduate intern for summer 2016.

A publication from the Delaware work was published in 2018: