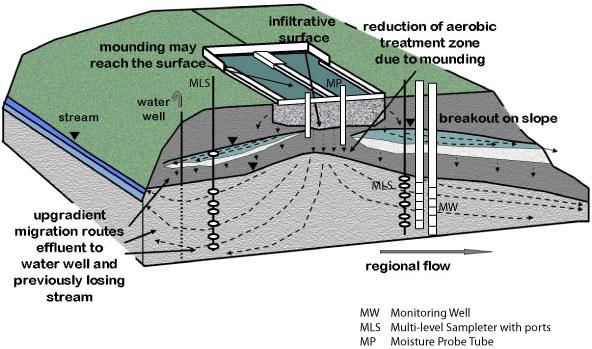 PROJECT TEAM - A. S. Andres, E. F. Walther, C. He, M. Turkmen (DGS), A.E. Chirnside, W. F. Ritter (Dept. of Bioresources Engineering), P. Imhoff, M. Akhavan(Dept. of Civil and Environmental Enginneering) The population of Southern Delaware is projected to increase 20% by 2020. This increase in population will be accompanied by a rise in proposed residential subdivisions (Delaware Population Consortium, 2006). The costs of constructing new or upgrading existing public wastewater treatment facilities can be daunting, especially for states where budgets are limited. As a result, many states, including Delaware, are more receptive to privately funded and operated land based wastewater disposal (LBWD) systems. One form of LBWD, Rapid Infiltration Basin Systems (RIBS) consist of several simple and relatively standard technologies employed for land-based disposal of wastewater. In Delaware, wastewater generated by parks, homes, and businesses is collected and conveyed to a treatment plant. Following chemical and physical processing and treatment of the wastewater, it is discharged to an unlined excavated or constructed basin. By design, the treated wastewater quickly infiltrates through the unsaturated or vadose zone to the water table. Once in the aquifer, much of the effluent flows and eventually discharges to a body of surface water. Depending on the location and design characteristics of an individual RIBS, effluent may be intercepted and pumped by water supply wells, or portions of effluent from an individual facility may slowly percolate deeper into the water aquifer or into underlying confined aquifers. If all of the individual components of a RIBS are working properly, the water may be safely reclaimed for other purposes such as maintaining surface-water flow, sustaining important subaqueous and wetland habitat, and supplying water for non-potable or perhaps potable uses. However, nearly forty years of research by academia, state, and federal scientists have documented that the Columbia aquifer is highly susceptible to contamination from application of wastes onto and into the ground. Contaminants persist in the groundwater for decades where they commonly impact potable water supply wells, and the contaminants will eventually discharge into bodies of surface water leading to well documented eutrophication problems (Miller, 1972; Robertson, 1977; Ritter and Chirnside, 1982, 1984; Andres, 1991; Guitierrez-Magness and Raffensperger, 2003; Denver et al., 2004; Pellerito et al., 2006). Debrewer et al. (2005) and Ator (2008) found that the causes of Delaware's water quality problems are consistent with those observed throughout the Delmarva Peninsula and much of the mid-Atlantic Coastal Plain. It should be anticipated that when one or more of the components of a RIBS malfunction, or if unanticipated natural hydraulic and/or geochemical factors are present, there is a risk for the effluent to create conditions that will adversely impact public (water supply wells) and environmental (streams, wetlands) receptors. This project aims to evaluate the risks and benefits of RIBS for Delaware in three main parts. Phase-I included a thorough literature search on RIBS and evaluated the performances of existing RIBS and associated wastewater treatment plants in Delaware, Massachusetts, North Carolina, and New Jersey. The second phase of the project assessed physical and biogeochemical effects of RIBS on the receiving environment - aquifer, streams, nearby wells, and surface waters. During this work, we conducted a variety of field experiments designed to characterize the geology and hydrogeology of a RIBS facility located at Cape Henlopen State Park (CHSP, Fig. 1) and the physical and geochemical hydrogeologic effects on shallow groundwater caused by the addition of treated sewage effluent through rapid infiltration beds.

Geochemical data are consistent with the conceptual hydrogeologic model, groundwater-flow directions, effluent discharge, and subsurface geochemical conditions. Nitrogen loading to the infiltration basins varies between a few milligrams per liter (mg/L) to more than 35 mg/L over the year in conjunction with the number of park visitors. Most of this nitrogen is converted to nitrate in the vadose zone. Once in the aquifer, the nitrate flows toward the swampy discharge area located south of the infiltration basins. Concentrations of nitrate-nitrogen in groundwater downflow of the infiltration basins follow the trends of nitrogen in effluent, ranging from a few mg/L to more than 30 mg/L. Concentrations in excess of 20 mg/L are observed in the groundwater more than 200 feet from the infiltration basins. Phosphorus loading to the infiltration basins co-varies with nitrogen between a few tenths of a mg/L to about 3 mg/L. Concentrations of ortho-phosphorus in excess of 2 mg/L are observed in the groundwater more than than 200 feet from the infiltration basins. These findings indicate that there is little rememdiation of effluent as it flows through the aquifer. The third phase of the project, led by PhD candidate Maryam Akhavan and including Paul Imhoff and Dan Cha (UD Civil and Environmental Engineering, Stefan Finsterle (Lawrence Berkeley National Labs), and Holly Michael (UD Geological Sciences) developed and tested computer simulation code based on the TOUGH-family of software. Ms. Akhavan's work successfully added capability to simulate overland flow to supplement the multi-phase subsurface flow and contaminant transport modules. This project was conducted in cooperation with the Delaware Department of Natural Resources and Environmental Control and the US Geological Survey State Water Resources Institute Program. Project reports were released in 2015 as Bulletins 21a through 21d in the DGS publication series. The first external publication was released in 2012 (Akhavan et al., 2012). A second has been published by the Journal of Environmental Quality (Andres and Sims, 2013). A third has been published by the Journal of Contaminant Hydrology (Akhavan et al., 2013).