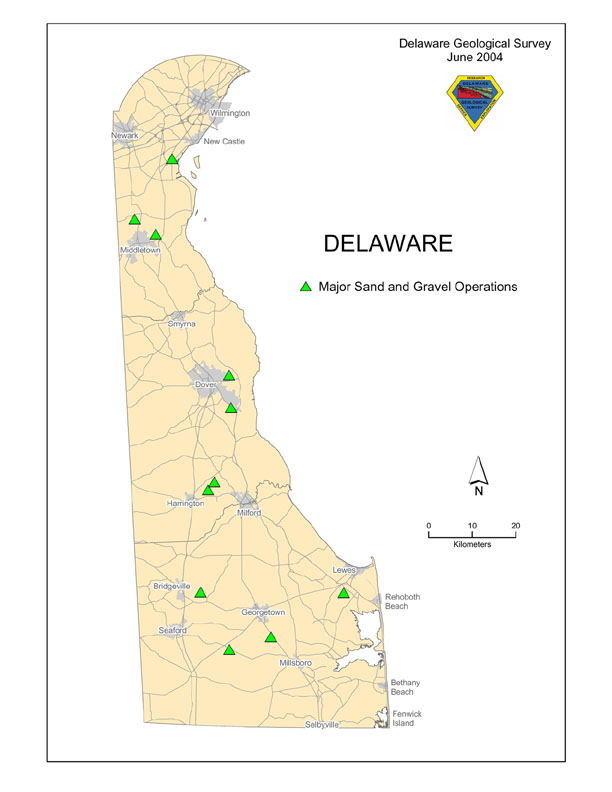 Locations of Sand and Gravel Producers in Delaware

Sand and gravel are essential for supporting and maintaining economic development throughout Delaware. These natural resources are used primarily for aggregate in the productions of concrete for residential, commercial, and industrial buildings, bridge and highway construction, fill for road beds and foundations, water and wastewater treatment facilities, and for replenishment of our Atlantic and Delaware Bay beaches.

There are relatively large quantities of sand and gravel in Delaware. Most of these resources occur as surficial or near-surface deposits that form a veneer of sand and gravel with a thickness up to 150-200 ft in the Delaware Coastal Plain. The deposits generally thicken from north to south across Delaware. However, the quantity and quality of the sand and gravel deposits is not evenly distributed throughout Delaware. There are significant quantities of sand deposits in Delaware Bay and off Delawareâs Atlantic Coast that have been and will be used for beach replenishment (DGS Report of Investigations No. 63 An Evaluation of Sand Resources, Atlantic Offshore, Delaware).

The U.S. Geological Survey in cooperation with the Delaware Geological Survey compiles sand and gravel production information on an annual basis and reports it in U. S. Geological Survey publication entitled "The U.S. Geological Survey Minerals Yearbook, The Mineral Industry of Delaware." (http://minerals.usgs.gov/minerals/pubs/state/de.html). At this time, there are at least 11 major sand and gravel production operations in Delaware. General locations are shown on the map. The USGS reported that approximately 3.64 million tons of sand and gravel valued at about $24.7 million dollars were mined in Delaware in 2007. The DGS estimates that the quantities of sand and gravel produced from the Stateâs natural resources are typically higher than those reported by the USGS. Reasons for this include: (1) not being certain that all major producers report production to the USGS; (2) state and local government agencies or companies that produce from borrow pits for their own use do not report production; (3) some operations that mine relatively small amounts of sand and gravel may not have been contacted, and, therefore, do not report production; and (4) production of sand from offshore areas for beach replenishment is not included in USGS figures. For example, according to the Delaware Department of Natural Resources and Environmental Control, in 2004 and 2005 approximately 4.4 million tons of sand with an estimated value of $20.3 million was dredged from the Delaware Bay and Atlantic Ocean and placed on beaches along the Delaware Bay and Atlantic Coast.

For more general information related to sand and gravel production and use, the reader may refer to American Geological Institute Environmental Series No. 8 entitled "Aggregates and the Environment." This publication provides the general public, educators, and policy makers a better understanding of the aggregates and environmental concerns related to aggregate resources and supplies (http://www.agiweb.org/environment/publications/aggregate.pdf).