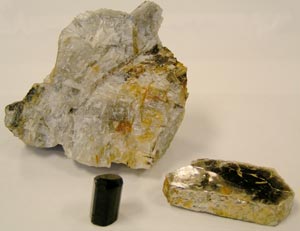 The description and identification of minerals in Delaware dates from the first quarter of the nineteenth century. During this time, both geologists and amateur mineral collectors have published on the minerals of Delaware including George Carpenter, Issac Lea, James Booth, and Henry duPont. The location of most mineral occurrences in the state occurs in the Delaware Piedmont. This area is comprised on mafic and felsic gneisses and amphibolites of the Wilmington Complex and the metasedimentary gneisses in the Wissahickon, Cockeysville, and Setters formations as well as the migmatitic gneisses and amphibolites of the Baltimore gneiss. The coastal plain contains relatively few mineral localities. These occurrences can be generally divided into those of the oxidizing or oxygen-rich environments of deposition yielding iron oxide deposits and those of reducing or oxygen-poor environments of deposition yielding iron sulfides, phosphates, and carbonates in greensand and organic muds.