What is a fossil?

The Glossary of Geology (Glossary of Geology, 4th edition, 1997, Edited by Julia A. Jackson: American Geological Institute, Alexandria, VA) defines a fossil as âany remains, trace, or imprint of a plant or animal that has been preserved in the earthâs crust since some past geologic or prehistoric time.â The field of geology involving the study of fossils is called paleontology. Fossils are of great use to geologists in understanding what the earth was like in the distant past and how life has changed through time. They are also a practical tool in the correlation of sedimentary rock layers from one area to another, which is an important part of exploring for petroleum and understanding the underground "plumbing" of groundwater systems.

Fossils can be fun to collect and interesting to study for the amateur, but they also tell geologists about the history of the world and how it was formed. The best time to look for fossils is after a heavy rain, when pieces of shell and fossil may be exposed in the soil. A stick is handy for scratching around in the top layer of soil. Collectors should remember their manners and should enter pits or other privately owned areas only after obtaining the owner's permission.

Delaware Geological Survey Special Publication Nos. 18 & 19 offer helpful hints for fossil identification and collection. These booklets are available by contacting the Survey or through the on-line ordering of DGS publications.

The most common fossils found in Delaware are from the Cretaceous period, and range from 65 to 100 million years in age. Some fossil collecting localities have also been found in central and southern Delaware, with the fossils generally being younger further south in the state. Fossils found in Kent County are commonly 12 to 20 million years old, and those in Sussex County mostly date from less than less than 1 million years. 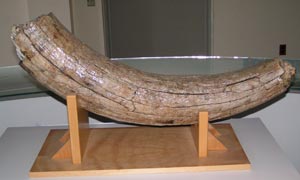 Tusk of Mammut americanum (American mastodon) discovered from the bottom of Delaware Bay after being caught in a scallop dredge. Pleistocene age.