Sillimanite, a white to tan to green aluminum silicate, (Al2SiO5) occurs in high temperature, aluminum-rich metamorphic rocks. In Delaware, it is found in the Hoopes Reservoir and Brandywine Springs areas.

In 1977, the Delaware General Assembly, acting on a proposal by the Delaware Mineralogical Society, established sillimanite as the Delaware State Mineral. This act recognizes the geological and mineralogical significance of the large masses of this mineral found as boulders at Brandywine Springs, an occurrence that was recognized as important in the 6th (1892) edition of Dana's System of Mineralogy. The Brandywine Springs boulders are remarkable for their size and purity. The sillimanite has a fibrous texture reminiscent of wood and could potentially be cut into cabochon gems showing a chatoyant ("cat's eye") effect. Sillimanite is not mined as an ore or raw material In Delaware.

Sillimanite forms at temperatures greater than 550oC, and its coarse grain size at Brandywine Springs indicates a prolonged period of high-temperature metamorphism of the rocks. These conditions are confirmed by the absence of muscovite and the occurrence of the pair sillimanite + K-feldspar (second sillimanite zone) in the schists/gneisses and by the presence of micropegmatites in the fold noses of the schists/gneisses, which are interpreted as partial melts of the rock under high-temperature conditions.

Delaware Facts and Symbols from Delaware.gov 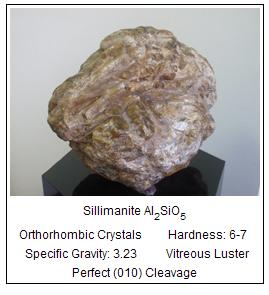